This month’s article will outline why I will again remain 100% allocated to the SPDR S&P 500 Trust ETF (SPY) with my retirement assets in September. First let me review my performance in August. All of the equity ETFs I monitor moved higher in August. The market, as measured by the S&P 500 index, rose 7.01%. As for my pension plan assets, I had a slightly lower gain of 6.98% in August which equaled the return of SPY. My investment objective of preserving my capital was met however I did not beat the overall market as measured by the S&P 500 index. Table 1 below shows my returns and allocations for the month of August and Table 2 below shows my returns for the past 12 months. 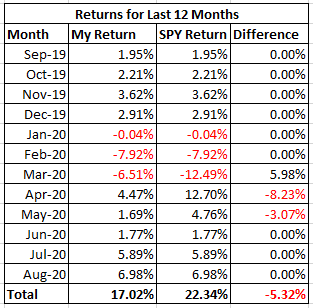 To review the purpose of this series of articles, my retirement account only allows me to buy the following four ETFs: iShares Core U.S. Aggregate Bond ETF (AGG), SPDR S&P 500 ETF, iShares Russell 2000 ETF (IWM), and iShares MSCI EAFE ETF (EFA). I can also have my money in cash. The question is how to decide where and when to allocate money to these various ETFs.

You can see that the moving average crossover system provided some excellent long-term buy and sell signals that would have allowed investors to capture long duration moves in the index; while avoiding costly drawdowns. Avoiding these costly drawdowns allows me to meet the objective of capital preservation.

I employ this strategy because I do not want to experience a large drawdown with my pension assets. During the 2008 – 2009 market crash many people didn’t even look at their retirement statements because they were afraid of what they would find. I submit that if those people would have used a market strategy similar to what I outline in this series of articles, they would have been able to avoid much of the decline during the bear market and consequently would have had less emotional stress during that time period.

The following charts show the current status of the ETFs that I am allowed to buy in my retirement account.

SPY was the big gainer for August as it rose 6.98%. Really nothing has changed from my comments last month. SPY remains above both of the moving averages. The moving averages remain in bullish alignment and are starting to separate more which is bullish. SPY remains above the dashed green support line. Lastly SPY had a very strong bullish candle and closed at a new high. What is not to like? Well, volume for the month was very low. Often the summer months have lower volume so perhaps it is not too much to worry about. SPY is bullish and my money will remain in SPY for August.

IWM had a good month gaining 5.48% in August. IWM is now in bullish alignment. It was the fifth month in a row that IWM had a positive gain. IWM is now closing in on its recent highs. One negative aspect for the month is that IWM had low volume. As mentioned last month, perhaps this is due to this being the summer and often summer months have low volume. Who knows? I will continue to monitor this ETF.

IWM underperformed SPY by 1.41% in August. The ratio is at its most recent low. Small cap stocks just can’t outperform the large cap tech stocks at this time. As mentioned last month, before I allocate money to IWM instead of SPY I need to see this ratio close above its 10 month moving average. Once that happens then it may be prudent to allocate a portion of my retirement funds to IWM. I will continue to monitor this ratio.

EFA also had a good month in August gaining 4.72%. EFA is now in bullish alignment, albeit just barely. It has risen for five consecutive months and is approaching its previous high. Volume declined for the month.

Chart 6 shows that EFA underperformed SPY by 2.11% in August. The ratio has hit a new low, again confirming the decision to invest in SPY over EFA. The ratio remains below both moving averages and the two moving averages remain in bearish alignment. As a proponent of trend following, I will wait until I see more improvement in this ratio before I allocate money to EFA over SPY. I will continue to review this ratio looking for the ratio to close above its 10 month moving average before I consider adding money to EFA.

EFA underperformed IWM again in August by 0.72%. The ratio remains inside the green box. Neither ETF can gain on the other. At this time there is no compelling reason to invest in EFA over IWM. I will continue to monitor this ratio.

AGG had its first decline in four months as it fell 0.82% in August. AGG remains in bullish alignment. One item that was interesting to me was that the volume in AGG was higher in August than it has been in several months. This is in stark contrast to the equity ETFs shown previously whose volume all declined in August. This ETF will be interesting to watch moving forward now that the Federal Reserve has announced a major policy shift concerning inflation.

Chart 9 shows that AGG underperformed SPY by 7.29% in August. This result has the ratio in bearish alignment now which was mentioned in last month’s article. It is really no surprise that this happened. Nothing has really changed here. Investors prefer stocks over bonds. This ratio is why I won’t place any of my retirement assets in AGG anytime soon. I will continue to monitor this ratio and look for evidence of a change in investor preferences.

To summarize this month’s article the three equity ETFs all gained while AGG, the ETF concentrated in bonds, lost money in August. All four ETFs are in bullish alignment which is a new development. SPY was the biggest gainer for the month as investors still prefer US large cap stocks over small caps and international equities. This is confirmed by Charts 4 and 6 which show the ratios at new lows. I will continue to allocate 100% of my money to SPY as SPY is in bullish alignment and IWM and EFA are underperforming SPY.

Disclosure: I am/we are long SPY. I wrote this article myself, and it expresses my own opinions. I am not receiving compensation for it (other than from Seeking Alpha). I have no business relationship with any company whose stock is mentioned in this article.

© All Rights Reserved By Noticiasempresa.com